You know pieces of my story,  I am a mother, a wife, a grieving daughter, a traveler, best friend and now a barely there blogger.

I’m also a Technical Sgt. in the Air Force reserve as a combat photojournalist. I’m the third generation in my family to serve in the military, and still serving proudly. ⠀⠀⠀⠀⠀⠀⠀⠀⠀

I’m a military daughter, military granddaughter, and now a military mom. My grandfather (on my dad’s side) was in the Army during WWII, and passed away from cancer when my dad was just 21 and already overseas serving in Vietnam. My dad didn’t talk about him too much, but there was a underlying reverence I could sense, but didn’t comprehend. My dad, at nearly 70 years old, had always hung a picture of his father in uniform on the cubicle wall of his desk.

What I saw in my dad, was a calling to serve, a life of steadfast purpose, and I can only assume my grandfather shared those same attributes.

I am just now beginning to see that the purpose to serve, runs in the family.

When I was 21 I told him about my decision to join the military, specifically the Air Force.

He scoffed, I mean, audibly scoffed.

You see, he was about 24 years into a career as a Aerial Scout in the Army National Guard. I didn’t understand at the time, but just about every other branch of service loves to scoff at the Air Force.

He muttered something to the affect of “Is the Chair Force now considered military?”with a half smile.

What I soon found out that the ‘scoffing” comes with the territory of being in the world greatest Air Force, the most technically advanced branch, that treats it’s people THE BEST. It’s not usually done with any malice, more like a playful jab.

He knew I was making the best decision of my life.

I raised my right hand the very first time, with my dad by my side in December of 2006.  After 4 years of service, I re-enlisted, again with him by side in the picture above.

My dad relived his younger years vicariously through my travels.

One moment we shared was particularly meaningful. In January of 2012,  I was working in Japan at Yokosuka Naval Base. I would regularly called my dad to tell him where I was at, and also if I was ever “Taken” I knew he would suit up and wage war to find me with the likes of Liam Neeson, except with a righteous handlebar mustache.

On the phone call I told him I made it to the base, and that I just walked past this gigantic aircraft carrier. My dad then told me he had been to Yokosuka during Vietnam, on his aircraft carrier the USS Constellation, back in 1969.

I stopped, looked around and got chills, thats what I felt then.

Chills realizing that I was on the other side of the world, standing in the same spot my dad had, nearly 43 years later. My eyes were seeing what my dad’s eyes saw. Smelling the brisk Japanese air, hearing the sounds of people walking all over the dock and the ships, just like he had. That’s the kind of connection of had with my dad.⠀⠀⠀⠀⠀⠀⠀

In late 2016, my dad’s was fighting his final fight.  In the hospital, this seeming unbreakable man was fighting kidney, lung, and brain cancer. I would sit with him and read Sun Tsu’s The Art of War, watch Clint Eastwood movies, and very delicately ask details about his life, not to make it seem like I was anticipating his death, but I really was trying to preserve every nugget of wisdom I could get from him.

It was in that hospital when I first  saw my dad tear up, and cover his face so I couldn’t see him cry.

That was a moment I saw the cracks, I saw his vulnerability, and you know what, it was when he talked about retiring.

To him, giving up his calling to serve, was by far worse than any cancer.

There’s no way of describing how tethered I felt to my dad, his only child, joined in spirit by our purpose, our travels, and military service.

I was honestly torn with the weight of continuing on my enlistment, after his death.

Ultimately, I decided to stay in, that their was no way my dad would want me to give it up.  Now having spent more than a decade serving, I stand proud of being my father’s daughter. My dad was through and through committed to his work,  and was such a driving force in my life. His discipline, tenacity,  military leadership and dedication to country haven’t been in vain.

Now that he is gone, I painfully understand that sense of reverence I saw my dad had for his.

He always supported me and was proud, he maybe saw that same calling in me. Being in the military isn’t only a job, it’s a lifestyle, mentality, a purpose and a family. ⠀⠀⠀⠀⠀⠀⠀⠀⠀

I may have lost my Dad, one of the biggest reasons I joined, and my biggest supporter, but thankfully I will always have the support of my military family. To be honest, when I wear my uniform, and go to work, that’s where I feel the most fulfilled.

Thats also where I feel his presence the most. 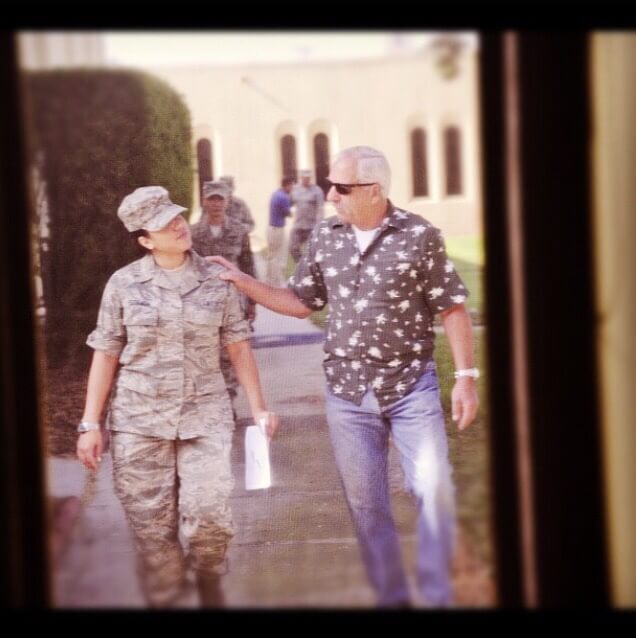 I am here to serve women who are struggling to harness their leadership mindset and presence. With over 13 years of military training, I offer leadership coaching and strategies to women who are ready to conquer their insecurities and be confident in both their professional and personal lives.